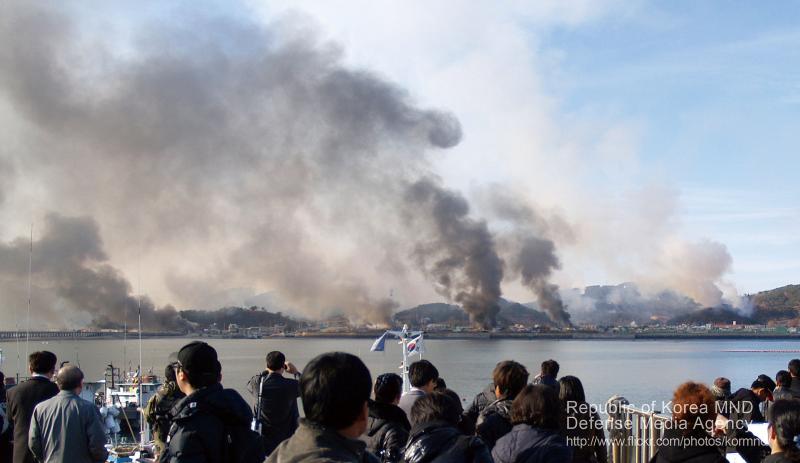 The Northern Limit Line divides the maritime boundary between North Korea (the Democratic People’s Republic of Korea, hereafter DPRK) and South Korea (the Republic of Korea, hereafter ROK). Just as in inter-Korean relations more broadly, North Korea’s strategy to exploit strategic and legal ambiguity dominates the security, political, and even ecological morass in the maritime domain. North Korea exploits the legal ambiguities of the disputed border and takes advantage of the broader inherent dangers of maritime security.

While the NLL extends from both sides of the peninsula, the biggest security, political, and environmental concerns are situated to the west, in the Yellow Sea (East Sea). The NLL has been the site of frequent low-level skirmishes, near-predictable artillery drills, and notable high-risk provocations, particularly since the final years of Kim Jong-Il’s rule through today. The NLL is yet another area where North Korea has exploited the ambiguities of its maritime border to toggle between charm offensive and brinkmanship. North Korea’s tactics dig into divisions within South Korean politics, as well as US policy toward North Korea. These divisions have kept some of the more promising cooperative projects from making any real progress not only as an inter-Korean issue, but within South Korea as well.

The NLL was drawn a month after the Korean Armistice Agreement was signed in late July 1953. The agreement named five islands that would fall under South Korean control. These islands then formed the trajectory of the land-based Military Demarcation Line (MDL)—from which the Demilitarized Zone (DMZ) is measured—to sea. Some evidence suggests that UNC officials chose the line to keep South Korean civilian ships, especially fishing vessels, away from North Korean soil.[1]

South Korea has maintained that the current NLL and the ROK islands nearby serve as an important buffer for protecting their land and sea territory. Today, the islands have transformed into important ROK bases to surveil North Korea and host defensive missile systems to counter a North Korean attack. Additionally, these islands serve as important sites from which South Korean forces could defend the mainland in the case of attack by air or incursion by land or sea. South Korean strategists highlight the political and strategic importance of clear waterways around the five Northwest Islands and frame the NLL as the maritime mechanism to execute the 1953 KAA.[2]

However, Pyongyang has always maintained that the NLL was drawn illegally. In 1999, Pyongyang ramped up irredentist claims by unilaterally declaring its own version of the NLL.[3] Puzzlingly, the DPRK version of the NLL consents to ROK control of the Northwest Islands. Pyongyang’s map redraws the maritime border further south, save a paltry one-mile waterway around all five islands. Were North Korea to attain these revisions, the new border would cleave awkwardly narrow waterways through which ROK vessels could reach the Northwest Islands [see figure]. The revision would also expose the area—including DPRK and ROK militaries to immense tactical ambiguities and practical difficulty in patrolling this border.

View of the Northern Limit Line (green) and the maritime boundary claimed by North Korea (purple) from the Maritime Awareness Project’s interactive map.

While the disputed NLL has low likelihood of being adjusted, North Korea’s claims build out bigger implications for the border’s legal and strategic ambiguity. Pyongyang uses its claims of the NLL’s illegality to appeal to the international community to get buy-in for its position based on international conventions of borders and sovereignty, such as the UN Convention on the Law of the Sea. The claim also seeks to undercut the legitimacy of joint US-ROK military drills and safety patrols as illegally taking place in Northern waters. North Korea claims all US-ROK military exercises threaten its own security and territorial sovereignty. Because of the contested border’s proximity to North Korean soil, Pyongyang justifies placing military installations, including XYZ on the coastline north of the DMZ.

Pyongyang’s claims of the border’s illegality provide rhetorical defense of its provocative actions. The NLL’s volatility has risen in profile since the early 2010s, particularly in three high-profile incidents that have both security and political implications. ROK Naval officers report frequent DPRK military and civilian vessels crossing the NLL during their patrols or fishing trips, most of which fly under the international radar. But low-level skirmishes have ignited national-level strategic debates. 2010 saw the sinking of the ROK Cheonan corvette just south of the NLL, resulting in 46 deaths and 56 injuries of South Korean sailors. Later that year, North Korea fired over 3,600 artillery shells onto Yeonpyeong Island, which killed four South Koreans including two civilians.[4]

Since assuming leadership in 2012, Kim Jong-Un has toggled between brinkmanship and charm offensive vis-à-vis the NLL. Artillery drills shooting toward or into the contested waters and these are near-regular occurrences most often co-coincide or follow joint US-ROK defensive military drills in the West Sea, which North Korea views as practice for invasion. Pyongyang also uses border provocations to coincide with key domestic and diplomatic anniversaries, designed to bring Washington’s or Seoul’s attention back to Pyongyang. In November 2020, North Korea conducted coastal artillery drills just north of the NLL on the ninth anniversary of the Yeonpyeong Island shelling—a clear reaction to the stalled relations with the South.

Kim Jong-Un has used other littoral tactics to heighten tension, cause confusion, and drive a wedge between the US and ROK coordination, particularly in times of tumultuous Southern domestic politics. In September 2020, a North Korean patrol vessel shot a South Korean fisheries ministry official, whose vessel inexplicably crossed the NLL. In response, Kim toggled between two different timbres: outreach toward the south and holding a tight military fist. Immediately following the incident, Kim Jong-Un issued an apology for the “unfortunate killing”—a rare concession to Seoul.[5]

However, only one day later Kim switched tack via KCNA to blame the South for the death, taking it to task for not controlling its citizens in the sensitive maritime zone. Like past high-profile provocations, Kim used the incident to justify further militarization of the border. Kim reportedly directed the general staff department to place units patrolling the MDL on both east and west coasts. Pyongyang’s Janus-faced response to the incident also dug into divisive South Korean domestic politics that struggle between the desire for continued inter-Korean dialogue and the constant Cold War era fear of spies and defection through the insecure border.[6]

Despite the severe security and political challenges, Korea’s littoral border zones also have the potential for focused, issue-specific engagement and confidence-building measures. The Panmunjom Declaration included a significant provision for maritime tension reduction. An important portion of the related 2019 Comprehensive Military Agreement (CMA) outlined specific security, economic, and ecological measures for demilitarizing the contentious NLL. In fact, at the height of leader-level engagement in 2019, some progress was made: a short-lived ban on live fire drills and covering the barrels of coastal artillery batteries. Since the dissolution of diplomatic engagement in the COVID era, Kim Jong-Un has been lambasting the United States as enemy number one and turning inward, shirking any practical commitment to the CMA. North Korea has continued its coastal military exercises and artillery drills through fall 2022.[7]

The CMA also revived the proposal for a maritime Peace Zone, originally proposed during the Roh Moo-hyun administration’s engagement with Kim Jong-Il in the late 2000s. One manifestation of the effort included a joint North-South survey team that mapped the waterway along the Han River estuary that straddles the MDL and feeds into the sea. The joint mapping project aimed to create safe and productive use of the river for tourism and economic exchange. The project also centered ecological protection, long framed as a depoliticized area for Korean CBMs on land and sea. Following the joint mapping, the ROK Ministry of Fisheries produced a map to share with the DPRK in January 2021. Since then, however, prospects of cooperative estuary management continuing are slim because of domestic North and South issues and tense geopolitics.

The United States seeks to prevent miscalculation and escalation in the volatile maritime domain. U.S. officials have discouraged any acts from Seoul that the DPRK might see as incommensurate retribution. Secretary of Defense Robert Gates wrote that President Lee Myung-bak strongly considered responding to the Yeonpyeong Island shelling in a manner Gates and his advisors viewed as “disproportionately aggressive, involving both aircraft and artillery.” Back-room conversations between the Lee administration and US defense officials walked down the escalation. [8]

Inter-Korean maritime issues in the West Sea cannot be separated from the U.S. role in inter-Korean issues because Pyongyang puts the United States at the center of its complaints about the legality of the NLL and target of coastal provocations. CBMs that only directly involve North and South actors can derail following soured US-DPRK relations, as we saw following stalled implementation of the Panmunjom Agreement and CMA.

Moreover, any legal change of the NLL issue also needs U.S. consultation as well as legal sign-on: as primary signatory to the Armistice Agreement, anything regarding the NLL issue needs a U.S. signature. Moreover, the nature of joint US-ROK drills in the West Sea means that maritime tension reduction requires direct U.S. involvement. As South Korea’s ally, the United States is obliged by treaty to assist Seoul in cross-border provocations.

North Korea has manipulated these ambiguities to ratchet up its overall military capabilities amid stalled inter-Korean engagement. Meanwhile, Seoul has an obligation to its people to maintain military readiness in the volatile West Sea in accordance with the aims of alliance goals that provoke North Korean maritime action. Stalled US-DPRK talks take the wind out of North Korean sails of engagement with Seoul, so even when Seoul takes the driver’s seat of CBMs—as in the case of the CMA—the United States necessarily takes a central role in confidence building or tension reduction plans.