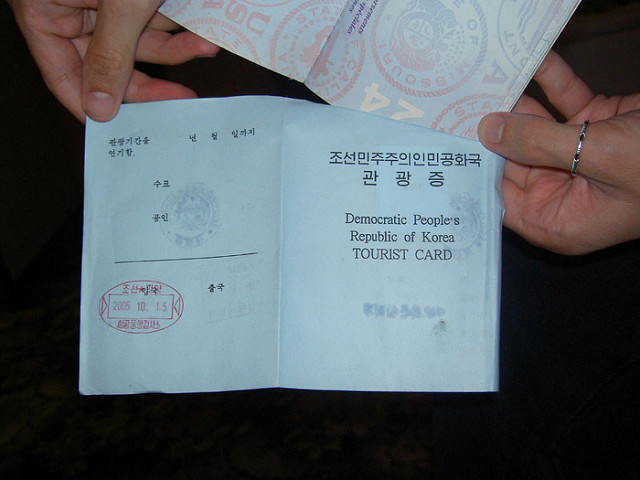 On September 1, a ban on U.S. travel to North Korea went into effect, prohibiting the use of U.S. passports to enter the DPRK except under limited circumstances. The State Department had formally announced the measure a month before it took effect, citing the “serious risk to United States nationals of arrest and long-term detention” while traveling to the country. In announcing the ban, the State Department also advised all U.S. nationals in North Korea to leave the country before it took effect. The measure came shortly after the release and subsequent death of U.S. college student Otto Warmbier, who had fallen into a coma while detained by North Korea, and amidst the continuing detention of three other U.S. citizens.

U.S. nationals can apply for special validation for travel that is determined to be in the national interest of the United States. This criteria may be met if the applicant is a professional reporter or journalist; is a representative of the International Committee of the Red Cross or the American Red Cross traveling for an officially sponsored mission; or if the trip is justified by “compelling humanitarian considerations” or is otherwise determined to be in the national interest. The State Department has published guidance on how to apply for a special validation, which will only be available on a single-entry basis, requires a two-step approval process, and cannot be appealed if denied.

Travel to North Korea using a U.S. passport that does not have this special validation may lead to the revocation of that passport or felony prosecution. (U.S. nationals may still travel to North Korea if they are able to use a passport from a third country, as the State Department only has the legal authority to restrict the use of U.S. passports and may not prohibit foreign travel as such.)

The prospect of restricting U.S. travel to North Korea was initially raised in May 2016 by Representative Adam Schiff (D-CA), with the introduction of the North Korea Travel Control Act (H.R. 2732) in the House. This bill, as originally introduced, would require the Treasury Department to issue regulations prohibiting transactions related to travel to North Korea, unless such transactions had been pre-authorized by a general or specific license from Treasury. The bill specifically prohibited Treasury from authorizing any license if “the primary purpose of such travel is to engage in tourist activities.”

In response to State Department action, Representative Brad Sherman (D-CA) introduced a substitute amendment to Schiff’s bill that would refocus the legislation on a reinforcing State’s passport-based travel ban, rather than creating a new transaction-based ban. Sherman’s amendment listed seven categories of travel that would be exempt from any travel restriction, including:

Sherman’s amendment was agreed to in a House subcommittee markup, and the amended legislation remains pending in Congress.