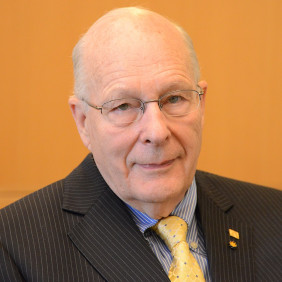 Former Director of the Center for Science, Technology and Security Policy
American Association for the Advancement of Science (AAAS)

In 1963, Dr. Neureiter joined the International Affairs Office of the U.S. National Science Foundation in Washington and managed the U.S.-Japan Cooperative Science Program. Entering the U.S. Foreign Service in 1965, he was named Deputy Scientific Attaché at the U.S. Embassy in Bonn. In 1967, he was transferred to Warsaw as the first U.S. Scientific Attaché in Eastern Europe with responsibility for Poland, Hungary and Czechoslovakia. Dr. Neureiter returned to Washington in 1969 as an Assistant for International Affairs to the President’s Science Advisor in the White House Office of Science and Technology. He also spent 5 years in Tokyo as the Vice President of Texas Instruments Asia. He was appointed in September 2000 as the first Science and Technology Adviser to the U.S. Secretary of State. Finishing this 3-year assignment in 2003, he was made a Distinguished Presidential Fellow for International Affairs at the U.S. National Academy of Sciences. In May 2004, he joined the American Association for the Advancement of Science (AAAS) as the first Director of the new AAAS Center for Science, Technology and Security Policy (CSTSP), funded by the MacArthur Foundation.