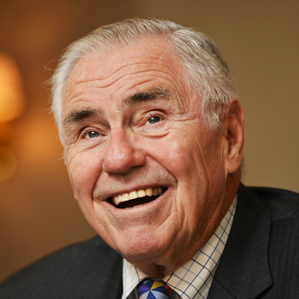 Donald P. Gregg currently is chairman of the Pacific Century Institute in Los Angeles and chairman emeritus of The Korea Society in New York City.

Following graduation from Williams College in 1951, he joined the Central Intelligence Agency (CIA), and over the next quarter century was assigned to Japan, Burma, Vietnam and Korea. He was seconded to the National Security Council staff in 1979, where he was in charge of intelligence activities and Asian policy affairs.

In 1982, Gregg was asked by the then Vice President George Bush to become his national security advisor. He then retired from the CIA, and was awarded its highest decoration, the Distinguished Intelligence Medal. During his six years with Vice President Bush, Gregg traveled to 65 countries.

Gregg also served as a professorial lecturer at Georgetown University from 1980-1989, where he taught a graduate level workshop entitled Force and Diplomacy.

In September 1989, Gregg began his service as the United States Ambassador to Korea. Prior to his departure from Korea in 1993, he received the Department of Defense Medal for Distinguished Public Service, an honorary doctoral degree from Sogang University, and a decoration from the prime minister of Korea.

In March 1993, Gregg retired from a 43-year career in the United States government to become the president and chairman of The Korea Society. He has been chairman emeritus since 2009. In 2012 Gregg was appointed chairman of the Pacific Century Institute.

Gregg is a member of the Council on Foreign Relations. Recent awards include an honorary degree from Green Mountain College (1996), the Secretary of Defense Medal for Outstanding Public Service (2001), Williams College’s Kellogg Award for Career Achievement (2001), the 2004 Bartels World Affairs Fellowship from Cornell University, the Philip Jaisohn Award for Service to Korean-American Relations (2005), the Distinguished Service Award from the American Committees on Foreign Relations (2006), the Korean-American Friendship Award (2007) and an honorary degree from Colorado College (2010). Gregg and his wife were honored in 2009 by the establishment of The Donald P. and Margaret Gregg Professorship at the Maxwell School of Syracuse University.